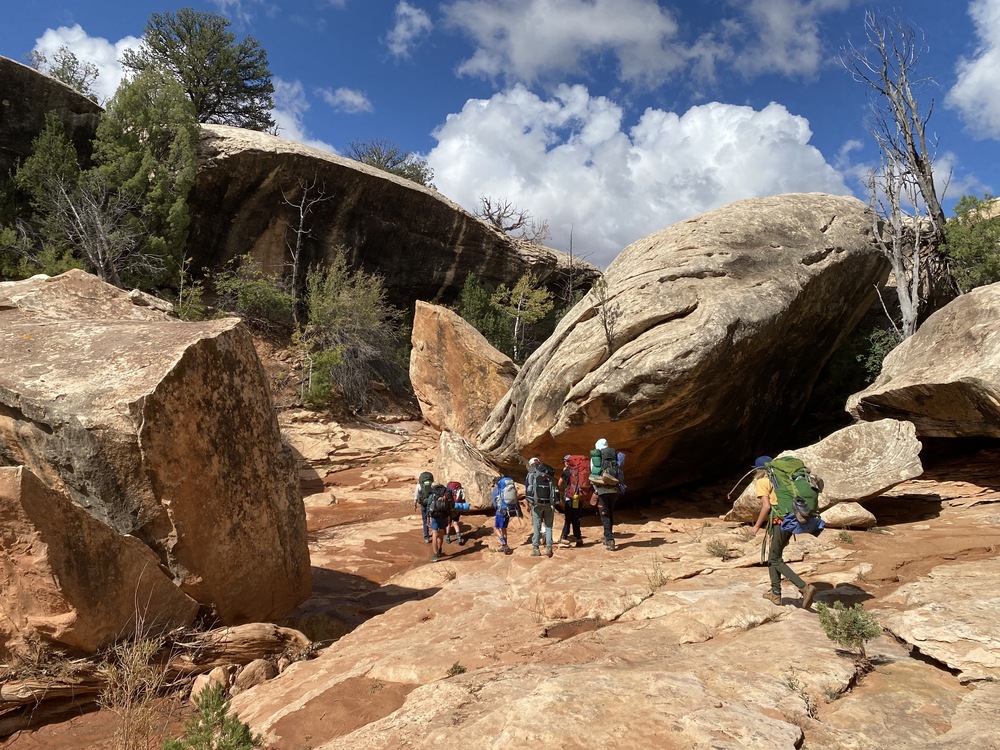 This fall, the Telluride Mountain School eighth graders spent four nights and five days getting to know rugged desert landscapes, each other, and themselves. For four of those days, students split into two groups. They immersed themselves in the towering canyons of Grand Gulch, a long connected canyon system in Cedar Mesa, Utah.

Planning for backpacking into this location involved a lot of research on water sources, as water is often scarce in Grand Gulch. However, for one of the groups on this trip, the issue was too much water! On the first day in, a group was delayed by a short flash flood. They waited out the rain on a safe rock shelf, in awe of the power of the cascading waterfalls down the canyon walls and the roaring rapids that built up so quickly through the narrowest part of the gulch. The delay caused them to change plans, and after several sessions of thoughtful and respectful group decision-making, they decided on a plan involving further progress down the trail, then day hikes to ruins and exiting back out the way they came. Meanwhile, the other group only had a sprinkle of rain! Though they weren’t unaffected by the high waters, they trudged through knee-deep mud and bushwhacked relentlessly, trying to find the trail through flood debris, but were able to complete the full trek.

On their journey through the canyon, students gained an understanding of the human history of the area as they read about the Basketmaker and ancestral Puebloan people who inhabited the area, as well as how the current Native American cultures utilize and honor Bears Ears lands. Students respectfully explored ancient ruins, making inferences about how people lived, what their pictographs represent, what their pottery was used for, and how they built structures so high up in the canyon walls that remain today. They expressed gratitude for the people who came before them and cared for the land we are now so fortunate to recreate on. The students acknowledged their position of privilege in their opportunity to explore this outdoor ‘paradise’ and reflected on ways they could help protect it.

After four long days of hiking with heavy packs, both groups of eighth graders learned how to read and follow topographical maps, better understand the benefits of weight distribution and thoughtful packing, the importance of “leave no trace” principals, when and how to communicate their needs, and how to support each other on the tough days and celebrate each others’ successes. Students found the trip physically and mentally challenging, socially and academically rewarding, and a worthwhile and fun way to push themselves and bond as a class.

Click here to view a photo gallery of the trip