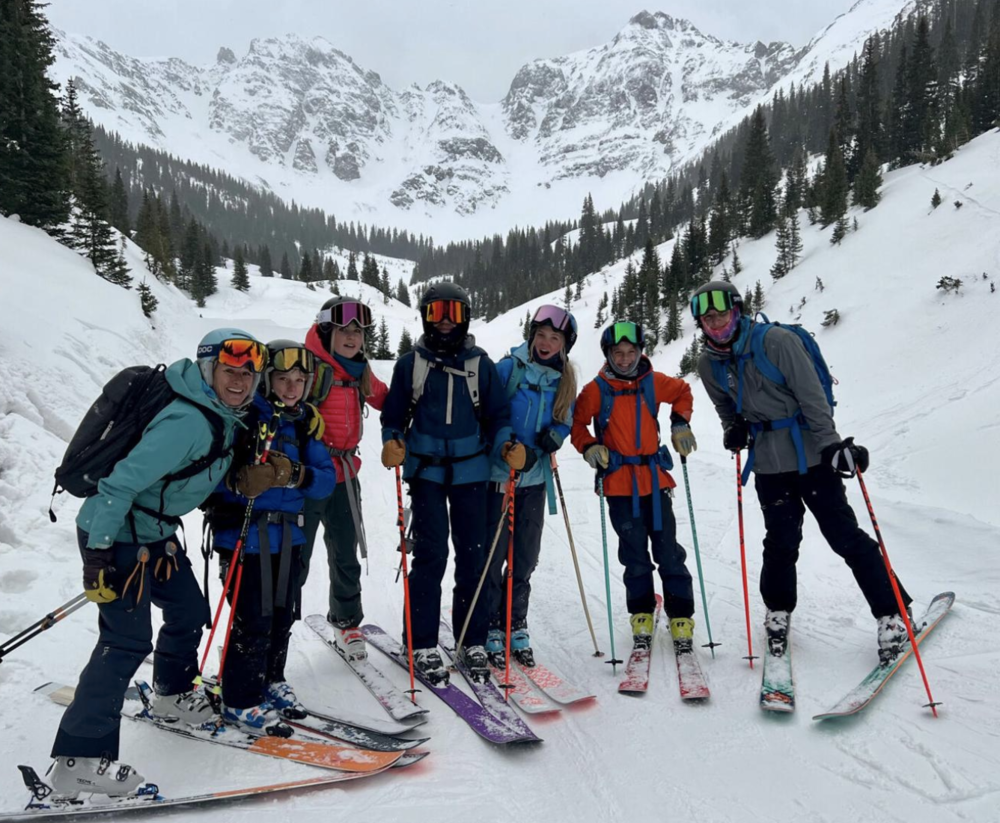 An education in the backcountry

Although all students in grades K-12 at Telluride Mountain School participate in Ski P.E., a subculture has developed that takes preparation for one type of skiing to another level. Called the Freeride Committee, or FC, membership is open to students in grades 7-12. ‘Class’ meets for lunch every Tuesday during the winter with Upper School Director Jamie Hozack. The curriculum? Avalanche reports, the state of the snowpack, and reviews of backcountry incidents across the region — all are on the table. The goal is to help develop informed, aware and lifelong backcountry enthusiasts from an early age.

TMS Winter Sports Director Ben Gardner brought the FC to TMS when he started working there seven years ago, because he’s passionate about backcountry skiing, safety and snow science. In addition to Tuesday lunch discussions, FC requires its members to attend Thursday and Friday Ski P.E. While belonging to FC is voluntary, more than 90 percent of TMS students in grades 7-12 are members.

“All of the students have a say in what we ski and how we ski it,” Gardner explained. This includes “Everything from being on the resort and choosing runs and lines they want to ski, to choosing terrain safe to ski in the backcountry based on avalanche conditions and our ‘no slide threshold,’ which means we don’t have any tolerance for moving snow while in the backcountry.”

Gardner doesn’t know of any other school that has a winter program so embedded in its curriculum. Membership in FC involves a progression of skiing experiences, beginning with an annual hut trip Feb. 4-6, during which Gardner took 20 seventh and eighth graders into the backcountry to identify different layers within the snowpack; to conduct beacon and partner rescue drills; and to ski Red Mountain Pass.

Upper school humanities teacher and college counselor Jesse McTigue, who was also on the trip, appreciates how FC allows students to demonstrate strengths outside of the classroom.

“Kids know what real challenge, responsibility and teamwork is,” McTigue said. “You put them in these situations and they have to work together to succeed and show up in ways that they may not have had to before. It's not contrived. There is an elevated sense of accomplishment, confidence and belonging.”

This year, a writer and a photographer from Backcountry magazine came along on the hut trip to gather information for a feature that’s scheduled to run later this year.

“Hopefully, we can become a model for other mountain schools to get kids out there and have these conversations and really prep this generation,” said Gardner. Over the weekend of February 25-27, five seventh and eighth graders completed an Avalanche Rescue and Recreational Avalanche Safety Level 1 course through a partnership with local backcountry education outfit Mountain Trip. Hands-on learning, via a field day on Lizard Head Pass, was followed by classroom sessions studying a backcountry curriculum called “Know Before You Go” in Ophir Town Hall.

Edwards led the trip and also completed the course alongside TMS students.

“It’s so powerful to teach and learn simultaneously, and I was able to slip into both roles during the course,” she said. “It’s important to role-model for students the value of being a lifelong learner.”

Then, on March 4, 22 TMS students in grades 7-12 skied with seasoned backcountry guides at Silverton Mountain to celebrate completing FC programming.

A new, annual experiential trip was added to the FC program this year when seven ninth and tenth graders spent four days in Jackson Hole during the last week of January with Hozack and upper school math teacher Kelsey Brax. Based out of the Teton Science School, TMS students honed backcountry skills by skinning Snow King and touring 4,000 vertical feet in Grand Teton National Park before skiing at Jackson Hole Mountain Resort.

The skiing, says Hozack, was more complex than ski tours that were done in the first year or two of the FC program.

“We got to connect with students from another community. Jackson Hole Ski Club has a group similar to ours, and it was a lot of fun to see our students interact with them on the hill,” he said.

Head of School Andy Shoff said FC extends the school’s athletic programming by combining outdoor education — rather than just outdoor recreation — with good leadership and decision-making. The goal: a lifetime of safety and fulfillment on skis, no matter the terrain. “We want to lead by example” when it comes to “what a non-competitive program can look like, which was optional and felt a little bit like a team, even if it isn’t focused around competition,” Shoff said. “Rather, it’s focused around learning and doing. It’s also a means for students to imagine developing a career in skiing and working in the mountains.”