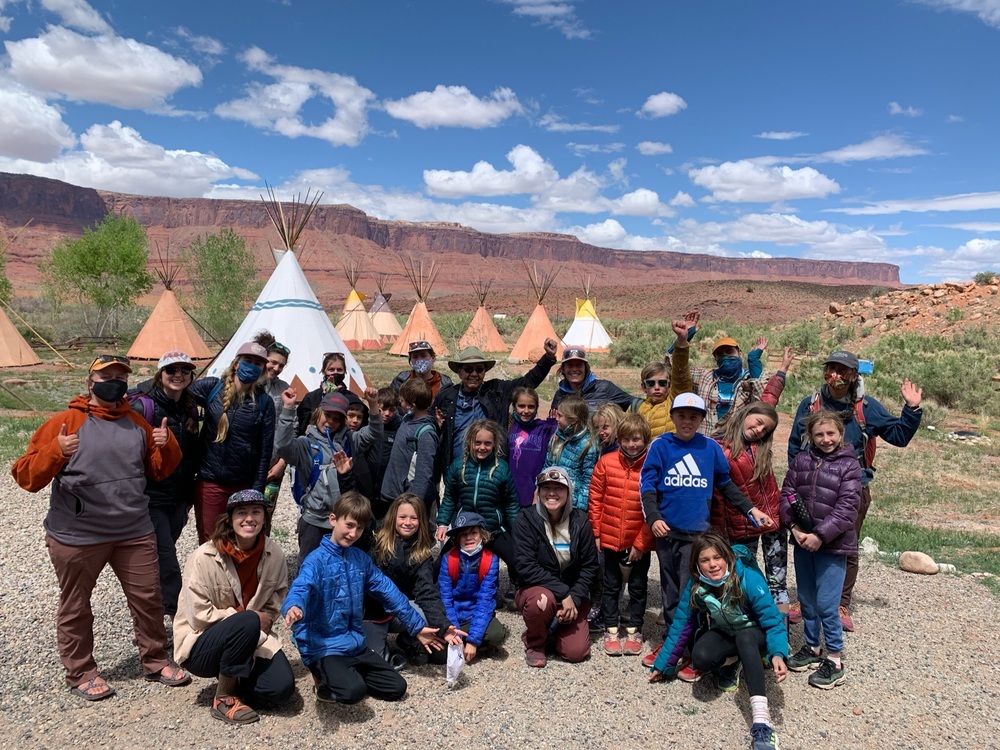 Third and Fourth Graders Explore the Wonders and Wildlife of Moab

This spring, the 3rd, and 4th-grade class left our little box canyon to explore the wonders and wildlife of the Moab desert region. They were gone for four days and three nights, spending a majority of their time at the Canyonlands Field Institute campus in Professor Valley. The trip was packed with learning experiences and adventure, with never a dull moment.

Upon arriving in Moab, the group was met by Canyonlands Field Institute and Dr. Tim Graham, a specialist in slickrock pothole ecosystems. Nestled in the slickrock overlooking Moab, students adventured down into the potholes and found an abundance of fairy shrimp. The group learned how critters like these survive the harsh dry desert conditions. After the lesson, the group headed up River Road to the Canyonlands Field Institute campus. While dinner was being prepared, the students roamed around the beautiful campus with surrounding views of desert towers, the Colorado River, and the La Sal Mountains. Students moved their belongings into the teepees they would be sleeping in for the week and settled in for their first night in the desert.

On the following day, the 3rd and 4th graders spent the day in Professor Valley. Students made nature art along Professor Creek and learned about the archaeological history of the land they were on. The campus and its surrounding land were once a trading ground for the Ute people. As a result, there were many artifacts in the area for the students to look at and ponder. That afternoon the students got to play a game called “Answer Real Questions to Win Real Prizes”. It was a trivia-like game in which students won adaptations for an animal they were trying to create. One group managed to create a creature that had “the force”, stretchy fingers, bioluminescence, and zygodactyl feet. The evening followed with a remarkable sunset, a campfire, and s’mores (of course!).

On the third day, the students woke from their teepees early and began preparation for a big day on the river. The group set out to raft the Moab Daily section of the Colorado River. The students, teachers, and river guides put in upriver and floated several rapids before arriving at a quiet beach for lunch. During their time ashore, the students received a lesson about watersheds and erosion. After rafting, the students were informed of a talent show that would occur later that night. In a frenzy, students dispersed to practice their skits and talents. Night fell, and students gathered at the campfire in their costumes. The show commenced and was filled with laughter, awe, and loving support from peers.

On the last day, the group woke slowly and packed up their belongings. They went on one final hike and circled up for a closing ceremony around a spiral of rocks hidden far out in the wild landscape. Each student found a small rock and, one at a time, placed it in the spiral and shared out a personal triumph of theirs with the group. Following the ceremony, TMS bid farewell to the Canyonlands Field Institute staff and loaded into the bus. They made a pit stop at Mill Creek to swim and eat lunch before heading back to Telluride, excited to share all of the stories from their time in Moab.